Continuing our journey after spending a day in Bogota, the next stop we made was in Cartagena. A friend of mine had been there few months before and this place came highly recommended by him. A quick Google image search and few minutes later, Cartagena was added to our list.

We luckily got the last few bunk beds in the hostel called El Viajero. Frankly, this was one of the last available places and we had to quickly make a decision. We didn’t get a chance to make prior reservations and now that we’d actually arrived in the city, having a place to roost was quite essential. The hostel, we realized later, was situated in the most conducive location for people like us. This place was inexpensive, filled with travellers who’d be on the road for at least a few months and quite well maintained. It’s not too bad to just wing it at times. 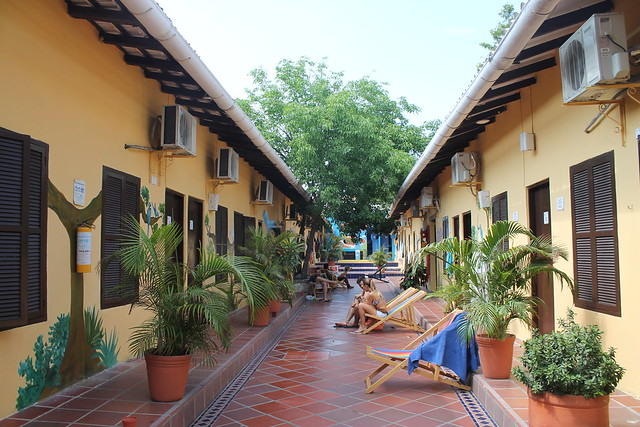 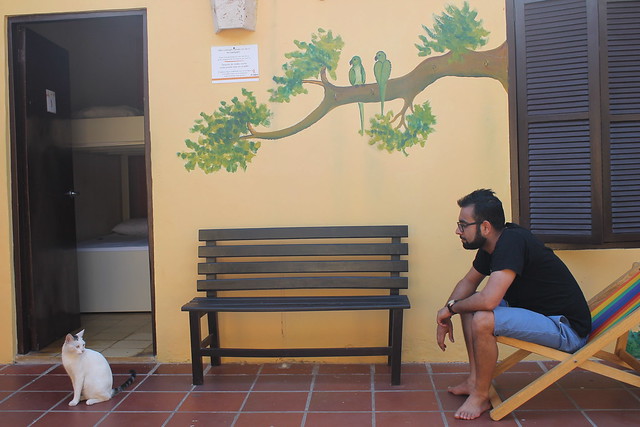 By the time we were on the streets of Cartagena, we were starving and would’ve settled for a food cart if we saw one. The blazing sun didn’t help the situation either. We sat down in the first restaurant we came across and once we’d wiped our plates clean, started planning for the evening. 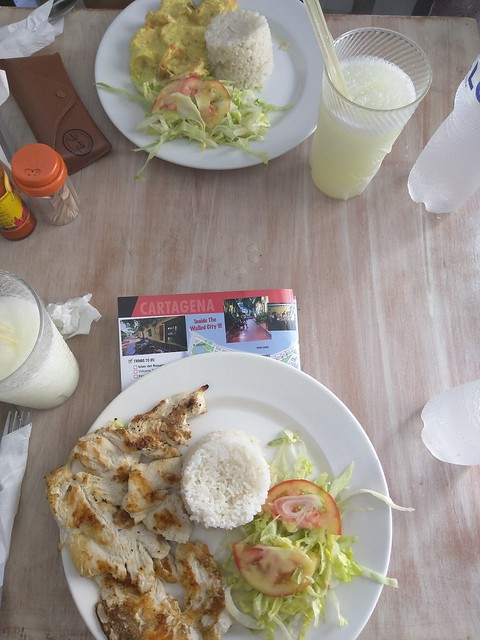 We headed out to explore the city. The way to enjoy Cartagena is to wander aimlessly, admire the colors, appreciate the architecture and have a sip of Tinto with a slice of cake once in a while. We only had a couple of days and we’d planned to spend one of those on a trip to Rosario Island, so we didn’t really wander off anywhere beyond the city walls except to spend time at Castillo San Felipe de Barajas. More on that later. The pictures will do a better job to depict what the city has to offer. 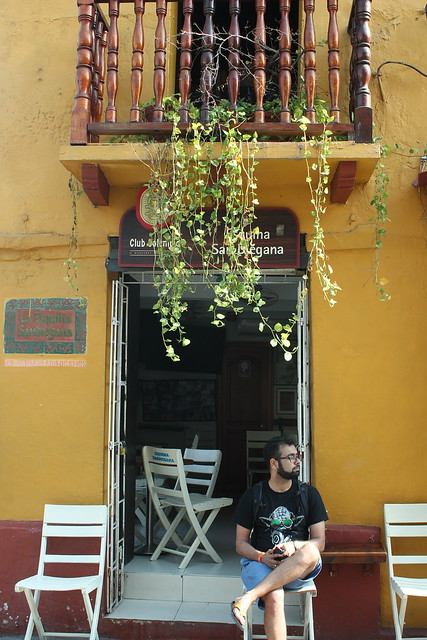 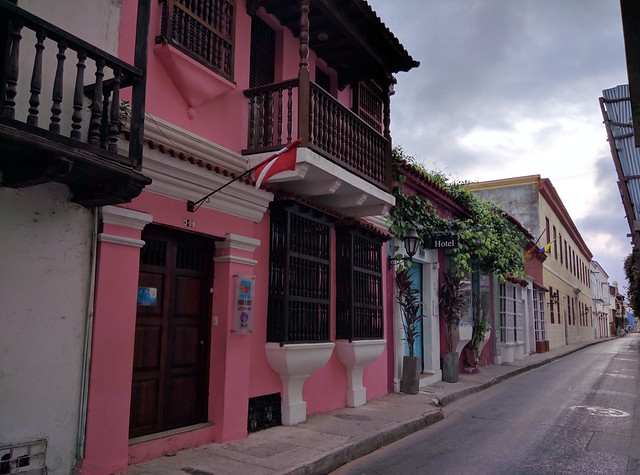 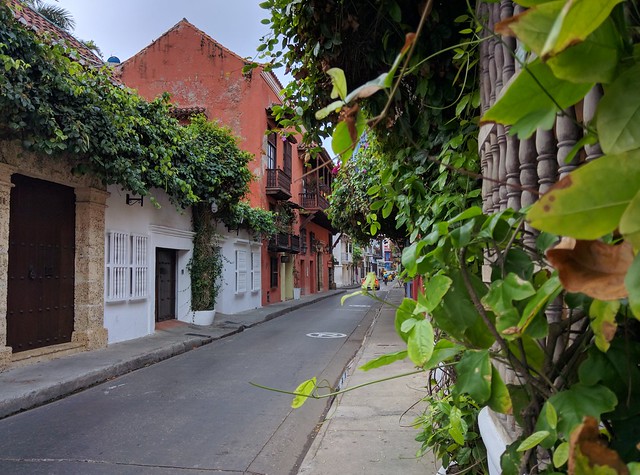 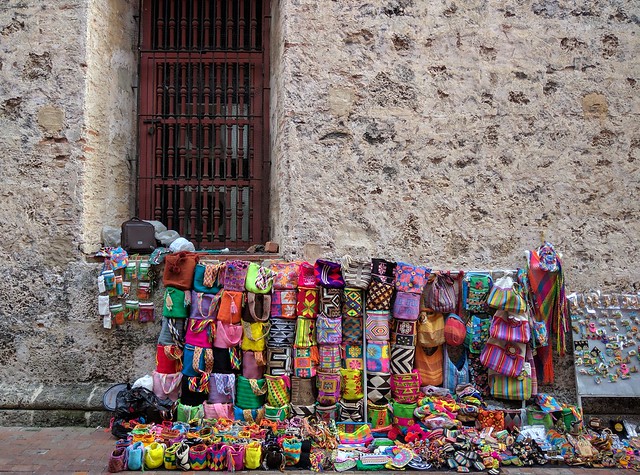 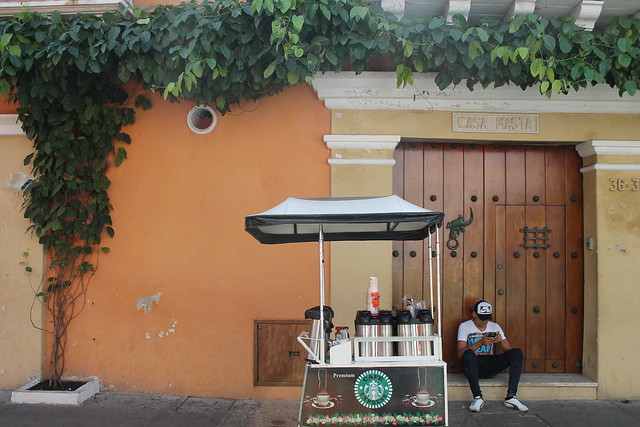 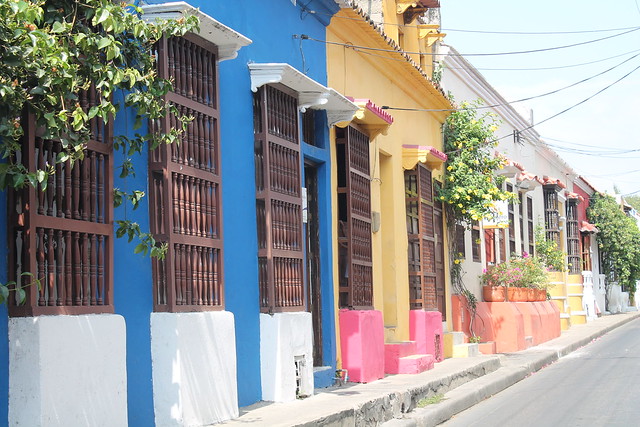 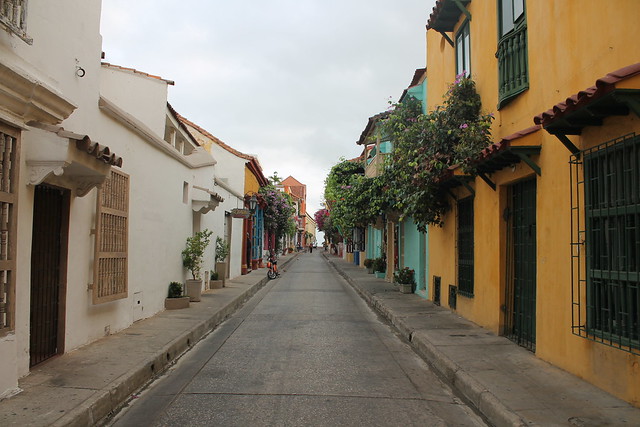 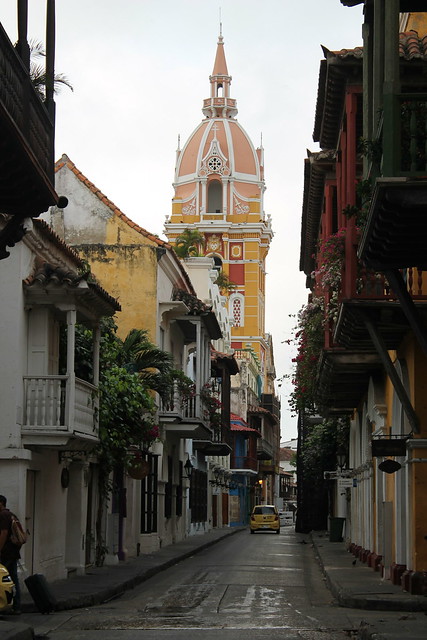 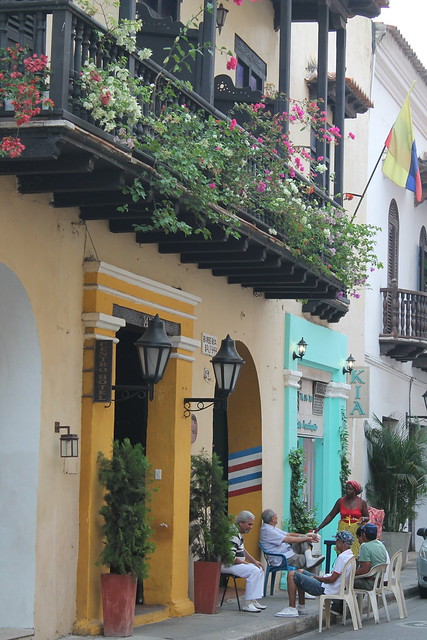 Till evening, we’d heard enough number of times that we absolutely should visit the only fort in Cartagena. We both hate going to places just to put a “been there” check mark on them and a lot of tourist attractions are just about this. I don’t have anything against such places, I’d just spend that time doing something else a new city has to offer. We were on the fence on the decision to visit the fort but finally gave in. We took an Uber to Castillo San Felipe. which was a twenty minute drive from the walled city. Ten minutes later, we were on top of the fort. The view wasn’t that bad and the cold breeze provided some relief from the blazing sun we’ve been suffering since afternoon. 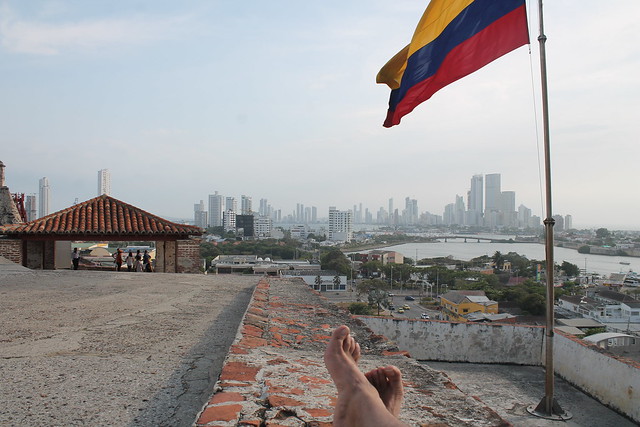 The view from the top combines a modern high rise landscape with a hint of colors from the past. The blue ocean and clear skies fill in the gaps. We spent a few hours there and stayed till sunset before we headed back.

I’ve always struggled to understand mankind’s fascination with sunsets (or sunrises for that matter). We travel to remote places, scale mountains and get out of our comfortable lifestyles to catch a view of sunset. Pictures with sunsets backdrops have been in vogue since the invention of camera. These now get posted as profile pictures. A rising or sinking sun is supposed to lend a sense of character and intensity to an otherwise ordinary landscape. These pictures are almost always “breathtaking”, “magnificent” or “cool”, judging by the comments and reactions. I’ve never heard of anyone describing a sunset they’ve witnessed as a regular sunset. Don’t get me wrong, I don’t hate the idea of enjoying a nice view. I just wonder about the “why” of it at times. Feelings like physical pain or excitement from winning a game are based on causality and relatively easy to comprehend. On the other hand, parts of human behavior that we call idiosyncrasies have no causality because of which, by definition, they can’t be understood. For me, fascination with sunsets is one of the idiosyncrasies of the entire human race. Maybe mine is that I find this a topic to write about.

Coming back to understanding-the-sunset problem, I think our reactions are a blend of a lot of independent factors. The most important these factors is the extent to which we immerse ourselves in that experience while pushing all other thoughts in the background. The experiences we remember as being amazing or breathtaking deserve those adjectives in our lives because we actually stopped doing everything else and let our senses completely indulge in them. Probably, its just an act of spending conscious time to appreciate what’s in front of us makes an experience memorable.

We were back, wandering the city streets, a few hours later. Sun had gone down and we were looking for places to have a drink. Finding a good spot was difficult and most of the squares and plazas were quite crowded. We decided to wait till dinner and in the meanwhile, go back to the hostel for a while. And also, bug a few people to take our pic. 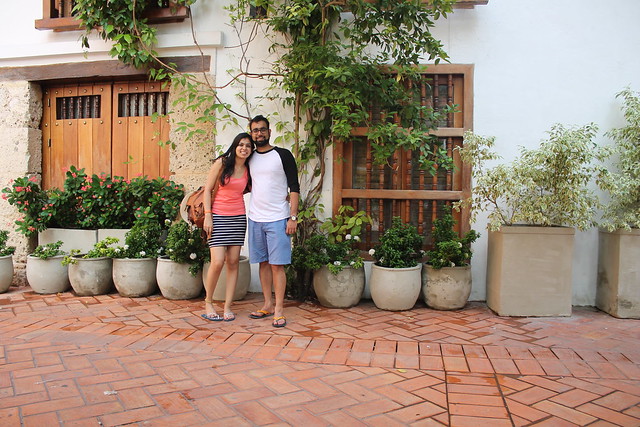 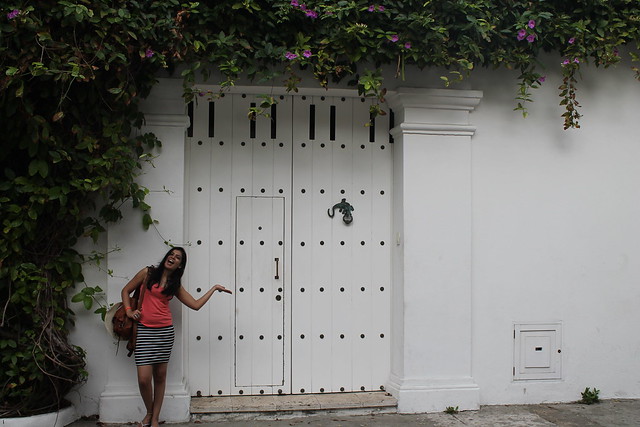 The evening was a lot more lively all across the city. There were bands playing in the upscale restaurants, street performers in almost all the squares, food carts turned into bar-on-wheels, locals and tourists getting into bouts of dancing on upbeat Spanish numbers and a general atmosphere of merriment. The temperature of the sea breeze dropped further by then, which made the entire experience even more amazing. Each establishment had a signature style, be it color, furniture, plants, tapestry, music, food or theme. It was refreshing to be surrounded with so much energy. 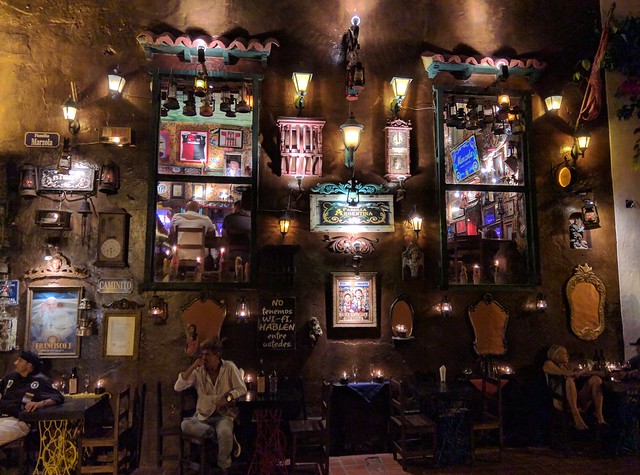 We ate at a Cuban restaurant with a Jazz band playing there. Both of us couldn’t understand a word of it but it was immensely entertaining nonetheless. 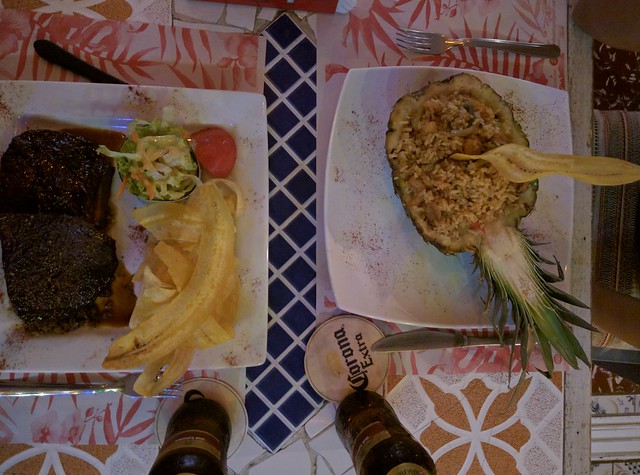 Next day, we’d planned to leave early for Rosario Island. This was an organized tour and we were assured that we’ll be on one of the least explored and secluded islands in the archipelago. 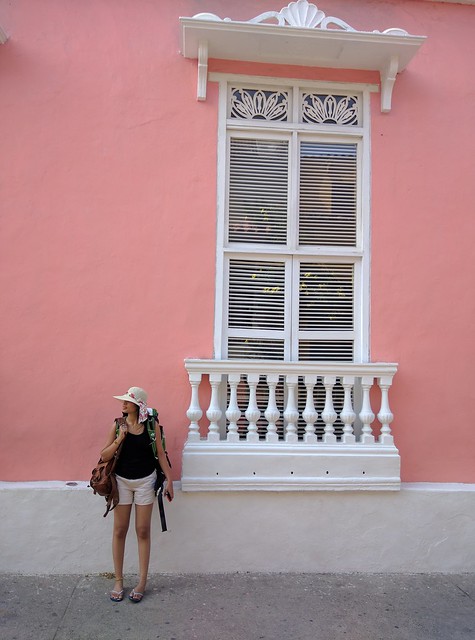 It took an hour and half to reach there and the moment we got off the boat, we knew that seclusion was the last thing we’re going to get there. We did end up on an island but the island had a sprawling resort and they organized daily tours from Cartagena via different agents across the city. Classic tourist trap. The good part was that it wasn’t as crowded as I’ve seen other places to be and we were the first ones to reach there so we got the best chairs on the beach. We went there to relax and relax we did. Jet Ski rental was dirt cheap and they’d just let you go with a promise to return after thirty minutes. There’s nothing better than being on open seas on one of those things, trying out a maneuvers and flying off and crashing into the waves. We both took turns doing this and after we’d had enough bruises, headed back to the shore. We spent the rest of the day there, eating, swimming, sleeping and sipping mojitos’s. 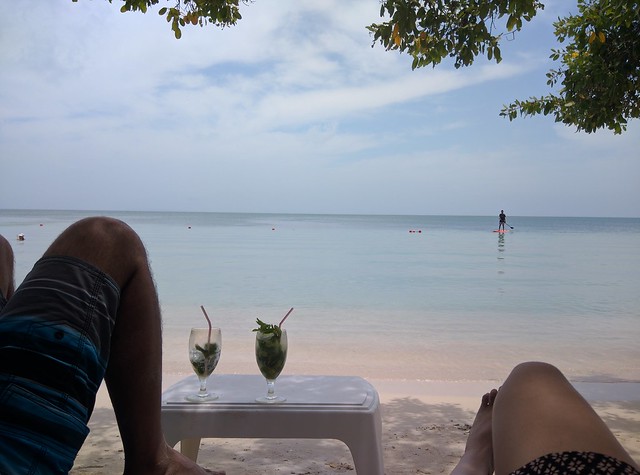 By late evening we were back at our hostel and all packed up, ready to leave the next day. There was one thing missing though. We didn’t get a chance to click pictures without at least ten people photo bombing it. So, next morning we made another round of the city at 5 AM for those. Most of the pics in this post have been taken at that time. 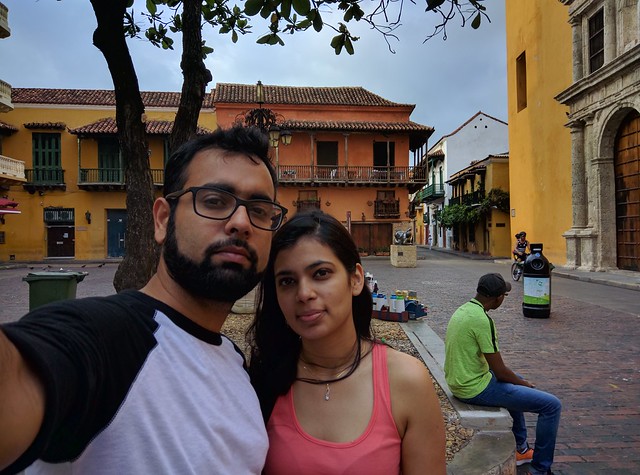 By afternoon, we’d boarded the bus and were on the way to Santa Marta, which was turned out be a 6 hour drive from Cartagena. More on that in the next post.

This is the second post in the series where my wife and I travelled in Colombia for a couple of weeks. The next post will be about our stay in Santa Marta and Tyrona National Park. The previous post was on Bogota.