Hiking in the Olympic National Park was one of the first agenda items for Summer 2017. Karan had already made plans to fly to Seattle while on his trip to US and Venky, too, applied for a few days of leave. We decided on the second weekend of May which, at the time, seemed like a good time to start exploring the great Washington outdoors. Apparently weather had different plans for us. Winter (and heavy rains) lasted way longer than expected this year which meant most of the places we’d initially planned couldn’t be reached due to heavy snow cover. We eventually decided to just reach the Olympic National Park visitors center and take a call after we have more information. We started early on a rainy morning to take the first ferry from Seattle to Bainbridge.

Our trusted steed. Had only 19 miles on it when we picked it up from the rental parking lot. 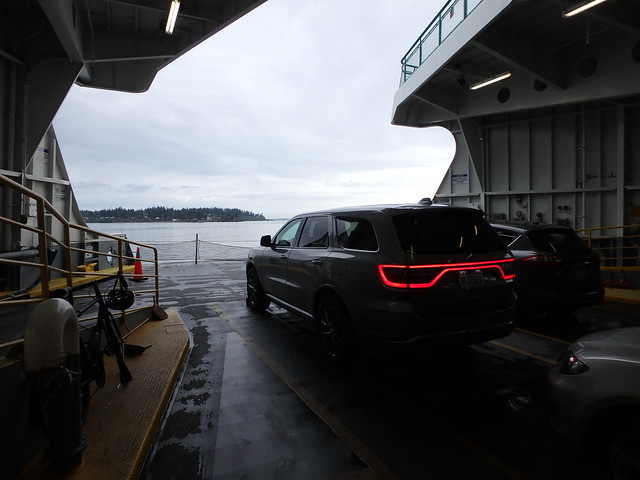 Coffee was required if we had to drive that far 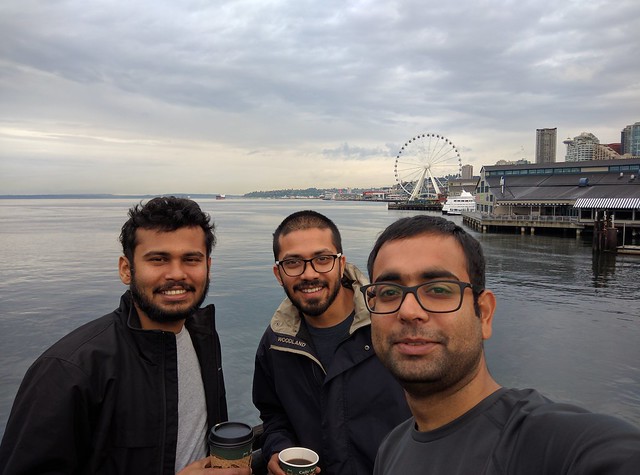 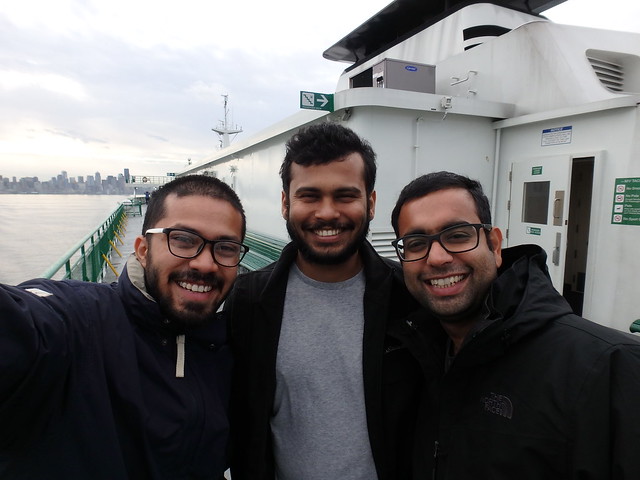 It took around two hours from the Bainbridge ferry terminal to reach the visitors center. Needless to say, the weather didn’t show any signs of mellowing down by the time we where. It never does when you really really want it to. We started discussing our options with the rangers who shot down the first three withing 30 seconds. They clearly believed that we had no clue what we’re talking about. No (sane) person would suggest hiking 12 miles to a lake covered in 6 ft of snow through rainforests this time of the year. We realized that mountains were clearly not an option so we had to stay way below the snow line. I wasn’t too keen on camping in a valley surrounded by 100 ft trees. Hence we agreed upon going for a beach hike. Obviously it wouldn’t be as awesome as what our preferred options were but its better than nothing. The rangers did warn us about it raining the whole time and to be aware of high tides when crossing over to different beaches. I’d never been on the west coast before so this was going to be interesting no matter what the weather turned out to be. We rented a bear can, had lunch in Port Angeles and headed towards the Third Beach trailhead. The plan was to start hiking south from there and camp at Scott’s Creek for the night. It was another couple of hours drive from Port Angeles to the trailhead and we made frequent stops wherever we saw an opportunity to get good views. Crescent Lake was on the way and took shots and clicking random pics. 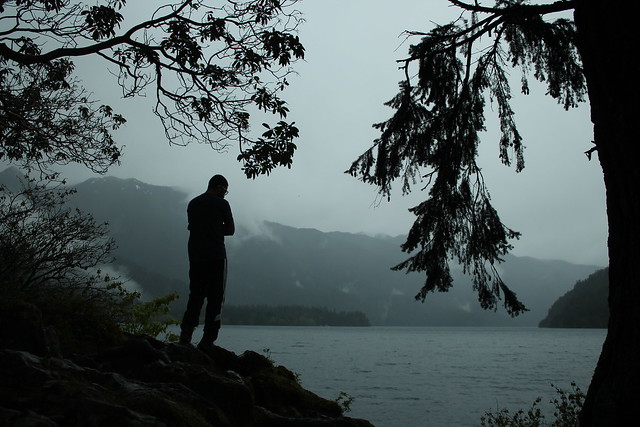 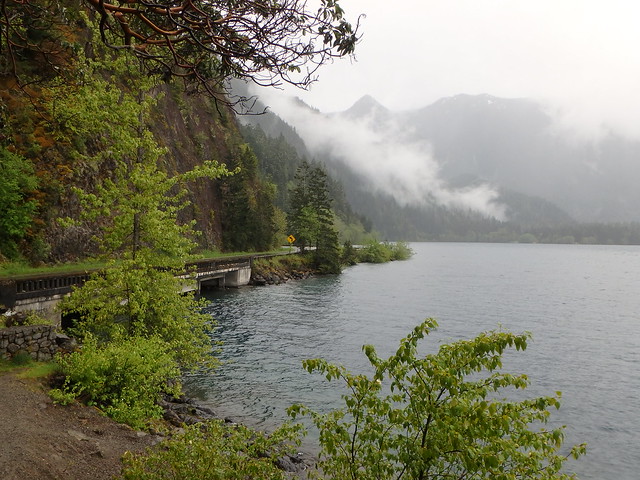 We stopped at a small convenience store to pick up firewood, stopped at a subway to pick some sandwiches and got a packet of garbage bags. All three of us had a feeling that we’re going to need those. Reaching the trailhead was a big relief. I was tired of driving and wanted to get on my feet as soon as possible. Luckily enough, the weather cleared up and it started to look like things actually might take a turn for good. 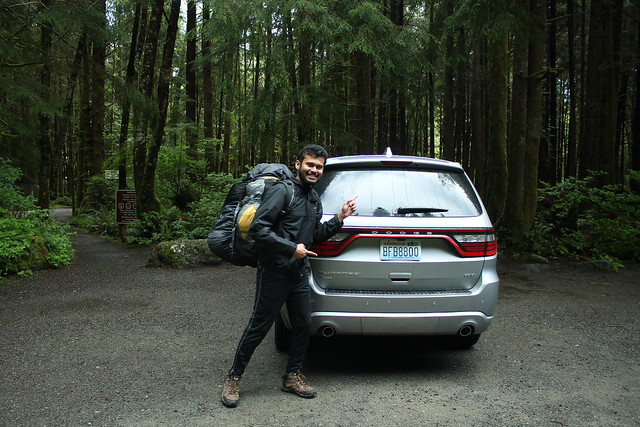 Reaching Third Beach from the trailhead is a short hike, more like a stroll for 45 minutes or so. By this time, all cloud cover was gone and were were treated with this view.

So much for weather forecasts. 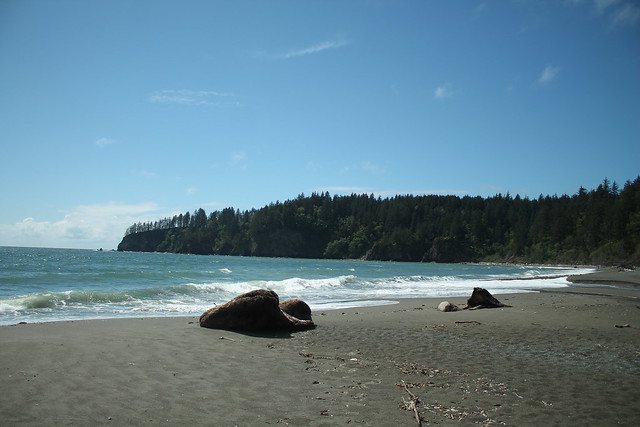 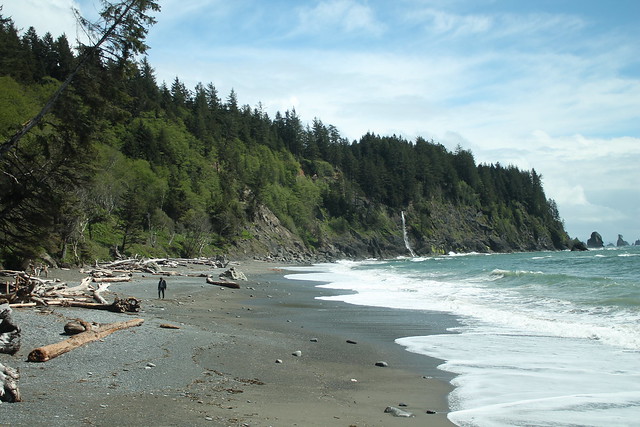 I’m not sure about the name of this superhero, might be a fake for all I know. 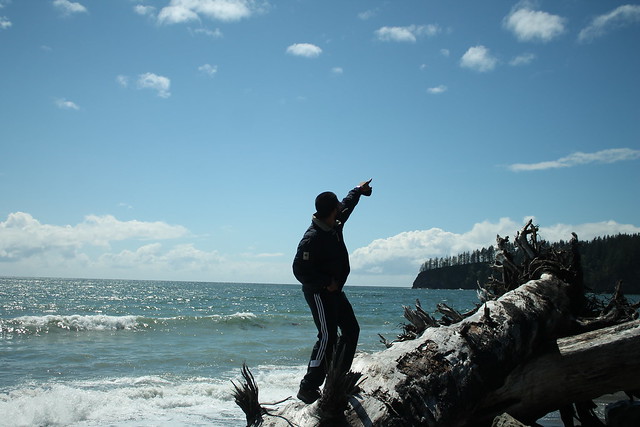 This seemed like a good time to eat the sandwiches we’d picked up earlier. 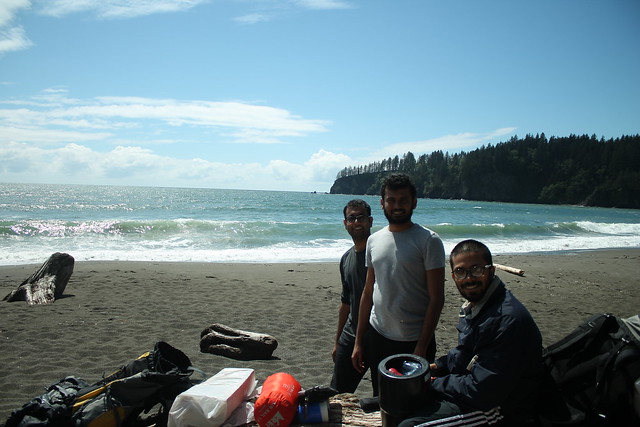 Three hours later, we were at Scott’s Creek. The hike wasn’t really difficult. There were a few crossovers that were tricky to navigate because of slush and slippery ropes. Overall it was of moderate difficulty and we were going at a good pace. We crossed four beaches on our way and stopped at each to dry the socks and shoes that were covered in mud. It was amazing to not see a single human being once we started. We dumped all our stuff at the camping spot and went further down the beach. 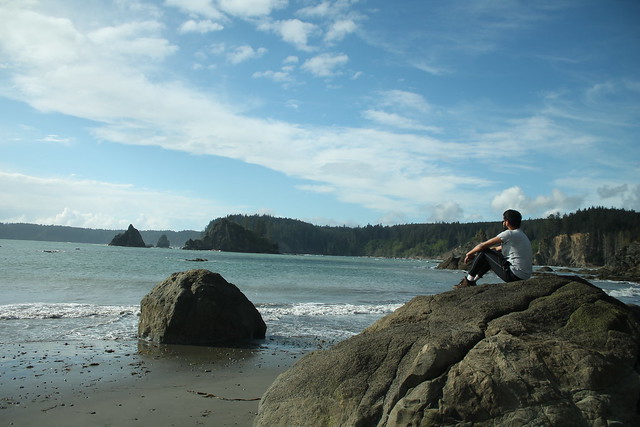 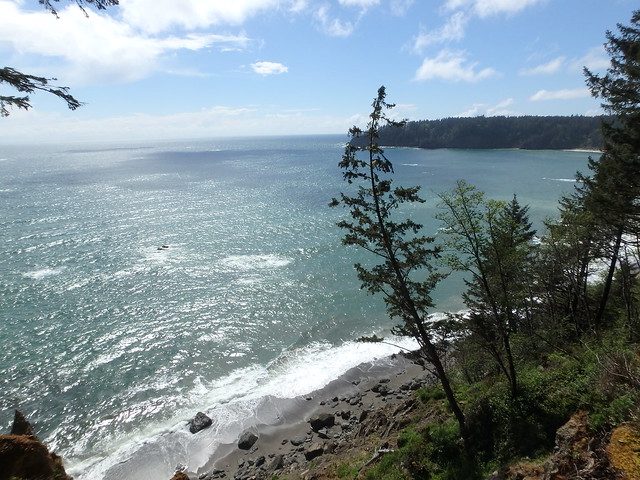 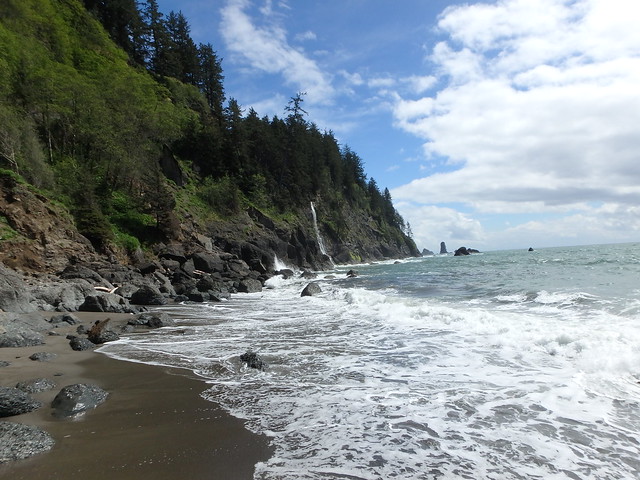 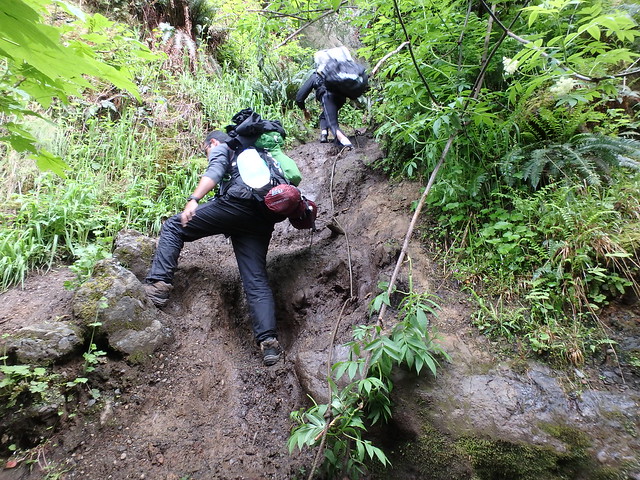 Home, for the night. 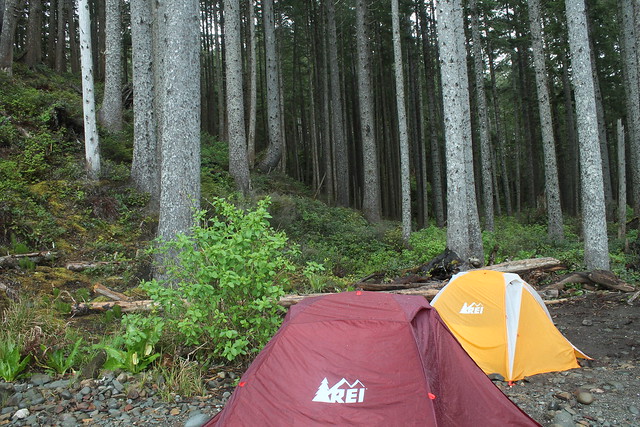 View from our tents 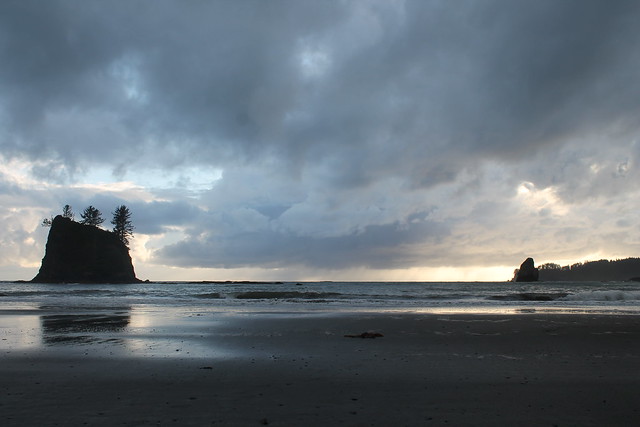 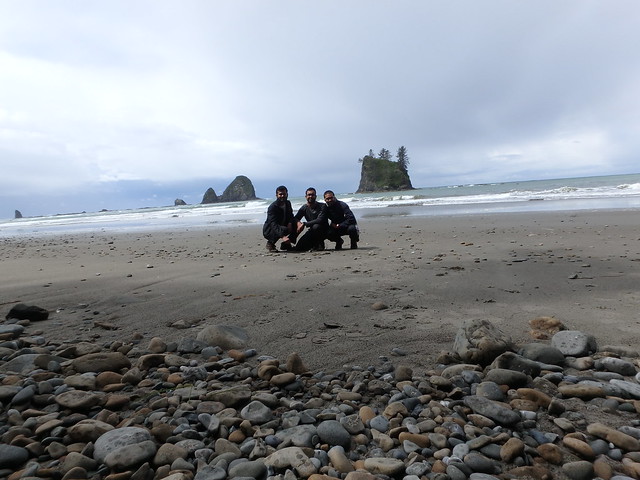 It started getting darker as the clouds started approaching. But we’ve had an amazing day and didn’t really have a reason to complain. We spent some time putting all that firewood to use, had dinner and crept in our tents just as the cloud cover reached right above us. It rained the whole night and we woke up to a mild drizzle. It was quite clear that we’re not going to have half as amazing a weather we had the day before. But we were heading back so it wasn’t an issue. We had a quick breakfast and coffee, wrapped up the tents and headed back. It took around 3 hours to reach the trailhead after a couple of breaks. 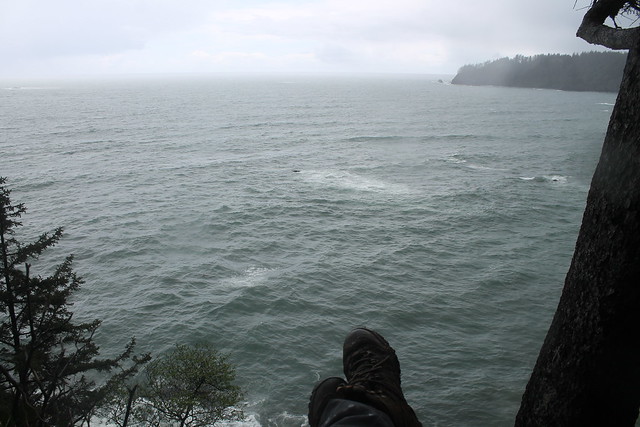 This wasn’t really the time (or the place) to ponder over the meaning of life. 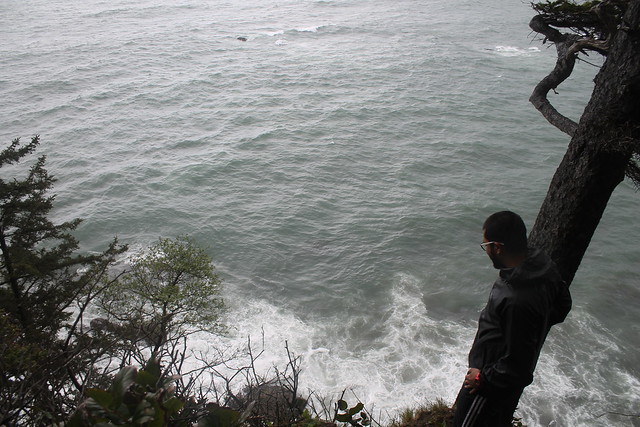 By the time we reached the car, we were cold, drenched and hungry. After a quick stop at Subway, we decided to drive to Ozette Lake campground and stay there for the night. Venky drove for the most part and it was a scenic drive through the valleys, forests and winding roads up and down the Pacific coast. There was no hike this time around. The sole objective was to stay put, cook, eat and drink. And that we did. 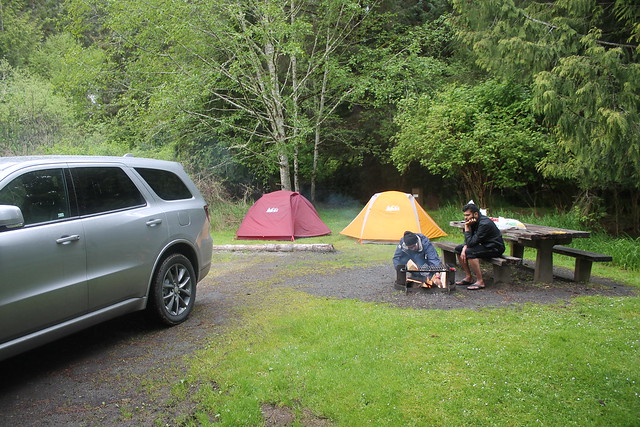 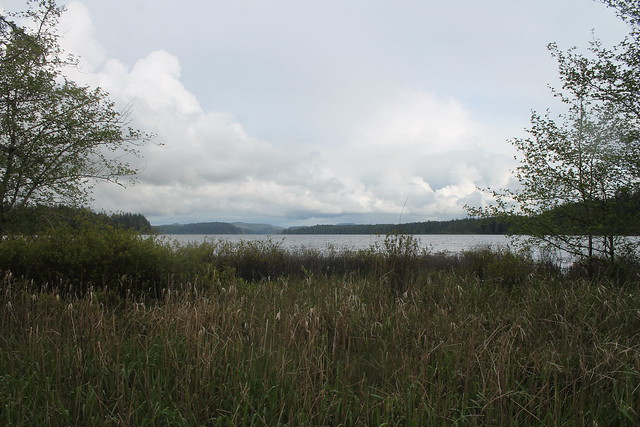 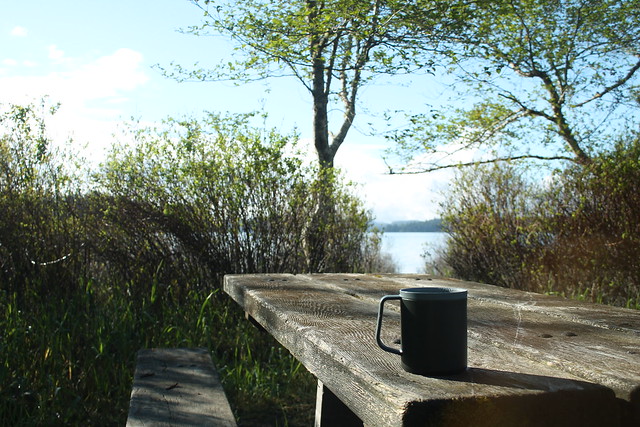 We wrapped up our tents and had breakfast early morning the next day. The plan was to head to Cape Flattery, which is the northwesternmost point of contiguous US, and turn back go home. This was the most scenic drive of the whole trip. Roads going along the coast with mountains on the other side. There were lots of secluded beaches and after we’d stopped at a few, we figured it’ll take us an eternity to keep with the schedule if we kept doing that. 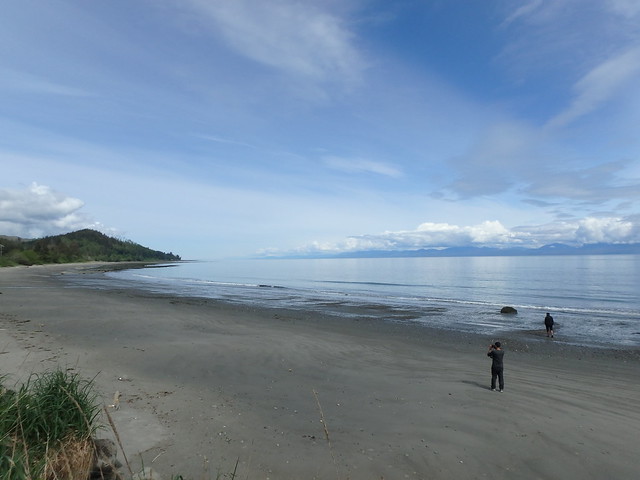 The hike up to Cape Flattery from the trailhead is a short and easy one.

This was the point from which we started our trip back home. 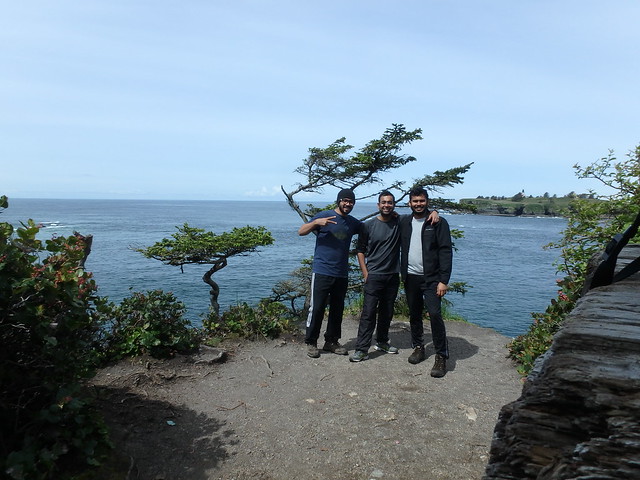 We stopped by an amazing diner called the Breakwater Inn. Nothing better than having great food with a view. 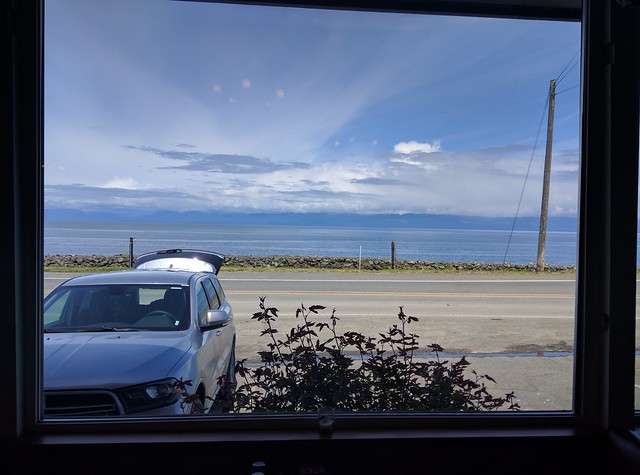 We filled up on coffee, sandwiches and pies to finally make a final dash to Port Angeles and then to one of the ferry terminals. Five hours later, we were sitting in a bar in Seattle. 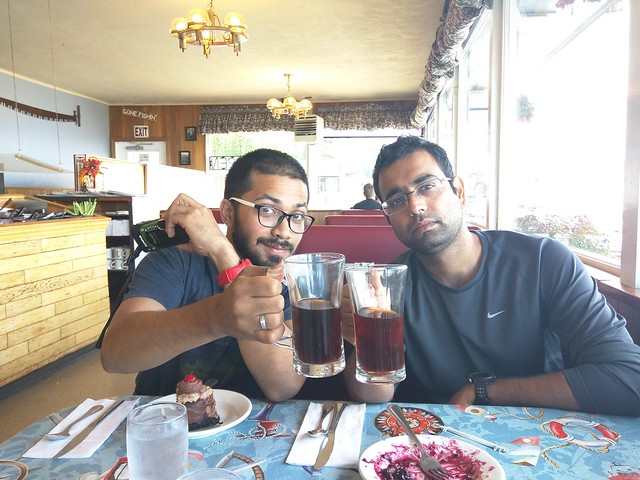 I couldn’t have even dreamt of going a trip like this a few years back. Mostly because of such different paths all three of have chosen. I never imagined that the paths will ever cross and we’d end up in a national park in US, which is halfway across the globe from where we originally belong. I’ve come to appreciate the value of moments like these more in recent times especially because they’ve become so rare.

The list of places we originally wanted to go to is still there on a post-it on my wall. Hope I’ll get to it soon, unsure of who its going to be with.